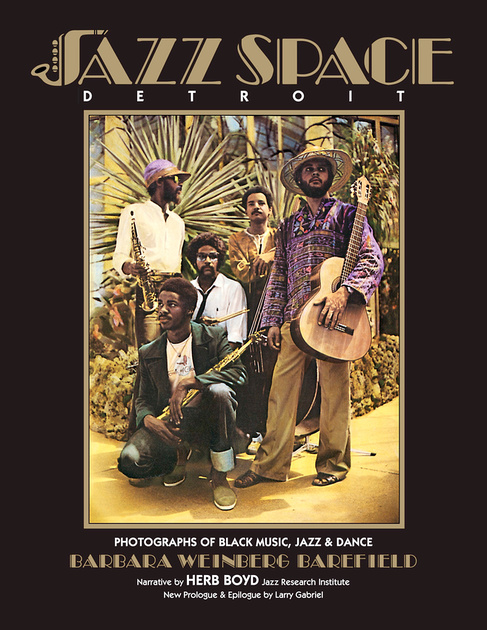 In 1980, she was awarded a grant from the Michigan Council for the Arts to create a book of her photographs and worked with author Herb Boyd to write the narrative. Now, after 40 years, she is re-releasing the book with additional pages and photographs, more content by Boyd, and a new prologue and epilogue by Larry Gabriel. This special edition is made possible with support from the John S. and James L. Knight Foundation through the Knight Arts Challenge program in Detroit.

The original Jazz Space Detroit book had been out of print for decades and is a collector's item.

Reserve your copy now. The first 100 people to order the book will receive a personally signed and dated copy. Email how you wish your inscription to read. The book will be ready to send to you at the end of October 2021.

The price is $24.95 plus $4 shipping to anywhere in the U.S. plus sales tax. For pick up (from the Palmer Woods, Detroit area) or to mail outside the U.S, please email your request to . You may also pay by check to Barefield DesignWorks and mail to 19550 Argyle Crescent, Detroit, MI 48203.

Decades of Detroit's rich legacy of Black music, Jazz and dance from the 20th century is captured within 80 pages brimming with iconic photographs by Barbara Weinberg Barefield and narrative by noted author/historian Herb Boyd — plus a new prologue and epilogue by Detroit writer Larry Gabriel.

Jazz Space Detroit preserves and elevates this legacy by illuminating a vibrant slice of American culture through more than 140 intimate photographs, portraits, and first-hand insights.

“Herb Boyd is the dean of Detroit jazz history. He writes about the music with unbridled passion and rare insight. Together with his wonderful text and Barbara Barefield’s beautiful photos, the reissue and expansion of JAZZ SPACE DETROIT is cause for celebration.”

“The 1970s and 1980s were exciting times for dance in Detroit, Michigan. Barbara Barefield and Herb Boyd’s work documents the era with passion, beauty and historical significance. It is of the greatest importance that the work and creativity of so many gifted artists be archived in this manner. Their work not only displays the individual artistry of the featured musicians and dancers, it also demonstrates the connectivity of a generation of multi-disciplinary artists. I am honored to have been represented in the original publication as well as this new version.”

“It’s a beautiful thing to have Barbara Barefield and Herb Boyd’s historic work calledJazz Space Detroit returning to print after many years. Following on the pioneering work of the great photographer Leni Sinclair, Barbara captured many important images of Detroit musicians who would otherwise have gone undocumented, and Herb Boyd’s text illuminates the city’s musical history with grace and rare intelligence. Larry Gabriel’s commentary for the new edition adds another dimension to the importance of this work.”

“Congratulations, Barbara, for all the music and memories you have documented in Jazz Space. I’m honored to be a part of this. It’s amazing how you have photographed all these great musicians. Your photos bring back many wonderful experiences—meeting Miller Brisker; receiving the Arts Midwest Jazz Masters Award with Marcus Belgrave; playing with Spencer, Tani, Jaribu, Faruq and Tony at the Detroit Institute of Arts; and performing with the Art Ensemble in Detroit.”

“jazz space Detroit is an invaluable peek at the people, politics, and pride of an unforgettable era in American history, when Detroit was an eternal jam session. What a town! What amazing people! Barefield’s photos are intimate, spontaneous, and evocative, just like the jazz she captures. Some of the photos brought tears to my eyes. The love for Detroit and its music really shines through. I defy you to turn these pages without catching the groove.”

“jazz space Detroit documents the remarkable history of Detroit’s rich musical life. Barbara Barefield’s stunning photographs sing from every page in counterpoint with Herb Boyd’s detailed and fascinating narrative. This book is an essential addition to the library of anyone interested in the intertwining histories of jazz, the extraordinary people of Detroit, and its vibrant cultural institutions.”

Herb Boyd is an American journalist, educator, author, and activist who has authored or edited 22 books. His most recent one, "Black Detroit: A People's History of Self-Determination," was named a NAACP 2017 Image Award Finalist and 2018 Michigan Notable Books honoree. His book "Baldwin's Harlem, a Biography of James Baldwin," was a finalist for a 2009 NAACP Image Award. In 1995, with Robert Allen, he was a recipient of an American Book Award for "Brotherman—The Odyssey of Black Men in America," an anthology. "We Shall Overcome," a media-fusion book with narration by the late Ossie Davis and Ruby Dee, is used in classrooms all over the world, as is his "Autobiography of a People" and "The Harlem Reader." His articles appear regularly in the New York Amsterdam News, and also can be found in The Black Scholar, The Final Call, Cineaste, Downbeat, The City Sun, Emerge, Essence, and The Network Journal, among others. He teaches Black studies at the City College of New York and the College of New Rochelle.

Boyd was born in Birmingham, Alabama, grew up in Detroit, Michigan, and attended Wayne State University. During the late 1960s, he helped establish the first Black studies classes there and went on to teach at the university for 12 years. He also co-developed and instructed the initial jazz studies curriculum at Oberlin Conservatory. His groundbreaking work as a journalist and historian includes his Detroit activities with the Jazz Research Institute and as a co-founder of the Metro Times newspaper. He has collaborated with Barbara Weinberg Barefield on her both editions of her book, "Jazz Space Detroit: Photographs of Black Music, Jazz & Dance," as well as the documentary film, "Jazz Space Detroit & Beyond" commissioned by the Charles H. Wright Museum of African American History and supported by the John S. and James L. Knight Foundation in 2021. In 2014, the National Association of Black Journalists inducted Boyd into its Hall of Fame. Among the highlights of his remarkable career was an invitation to fly on Air Force One with President Obama, whom he has interviewed on several occasions.

Larry Gabriel is a Detroit journalist who has won several awards from the Michigan Press Association -- most recently in 2020 a first place for a feature story in the Kresge Foundation publication "A Life Speaks." In 2012 he was named Best Local columnist by the Association of Alternative Newsmedia for "Stir It Up" in Detroit's Metro Times. Gabriel has been editor of the Metro Times and UAW Solidarity magazine. He was assistant entertainment editor and a features writer at the Detroit Free Press. Gabriel garnered a Grammy nomination for liner notes for his contributions to the booklet accompanying 1992's Hitsville USA "The Motown Singles" collection 1959-1971 boxed set. His essays appeared in 2014's "Detroit Resurgent" (Michigan State University Press), and 2016's "Heaven Was Detroit From Jazz to Hip Hop and Beyond" (Wayne State University Press).He is the author of history of the musical legacy of his family, "Daddy Plays Old-Time New Orleans Jazz."